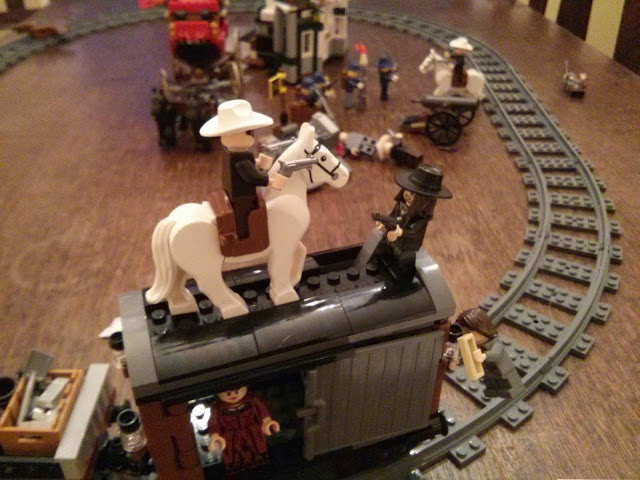 Six turned Seven last week, and asked for a Lone-Ranger-themed party (inspired by -what else?- Lego).  You might think he's branched out from cops and robbers, but really, it's just the old obsession with a Texan twang.  In the last month-and-a-half, we've moved across the country, bought and sold a house, and started 4 kids in 4 different new schools... so I was just grateful to be able to pull together a party at all, and have new friends to invite to it.

I owe so much to a couple of other bloggers from whom I pilfered ideas that I thought I'd share what I came up with for future moms-of-small-boys to look up late at night. 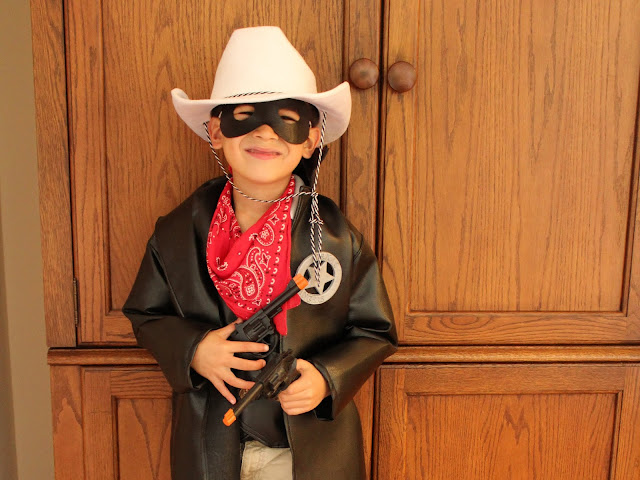 I tried - oh how I tried! - to find a brick-and-mortar or online retailer that had a black duster in his size... but the Disney Lone Ranger that the Lego minifigure is modeled after doesn't seem to have enough of a following to warrant mass production until closer to Halloween.  So with some guidance from one of my favorite DIY kid clothing bloggers, his police man costume for a pattern, and a couple of yards of pleather from Joann's, we had a pretty passable duster and leather vest.  And enough pleather left over to make a half dozen masks, a double holster (hidden under the duster), and some chaps in the future when I recover from this birthday.  I couldn't stomach spending $20 on ebay on a Texas Rangers badge, so $2 worth of silver sculpey made a good enough knock-off to put that smile on his face. 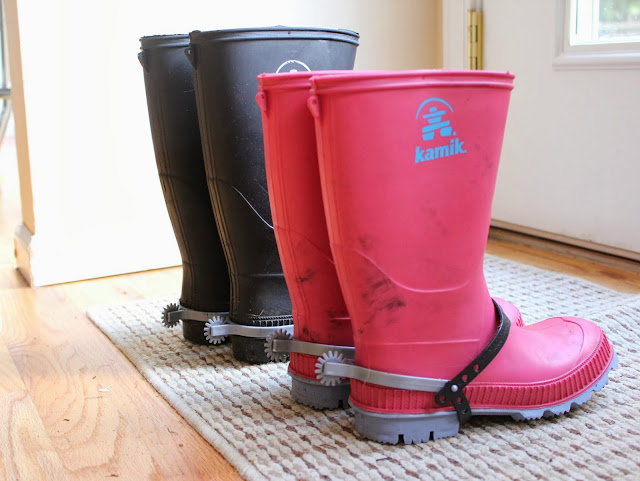 Gun/silver bullets/spurs/sheriff's badge:  $1 Western toy kit at the Dollar Tree, cheap enough to outfit each guest with a set in their goodie bag.  Red bandannas, $1 at Party City, white Stetsons $5.99 at Party City, or $1 for pink foam ones at the Dollar Store, and a can of white Rustoleum will cover about 2 (the flocking on the foam just soaks it up... try to find smooth foam ones if you go the spray-paint route). 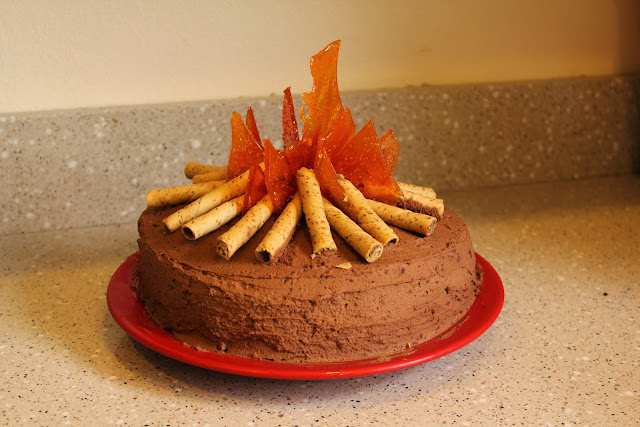 Another mommy blogger saved me with her idea the night before the party.  The only difference here is that I just used straight granulated sugar melted in a pot over the stove, colored with some red and yellow sugar sprinkles, and then poured onto parchment paper to harden.  Sticking the seven candles among the sugar flames was a fun effect. 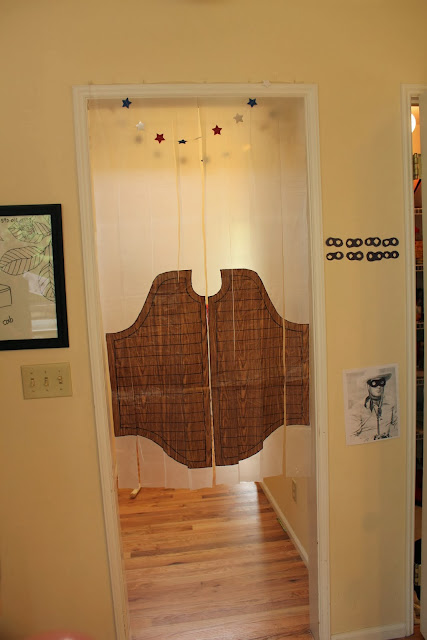 I used all our patriotic décor for a red-white-and-blue theme.  Another blogger had found a saloon door curtain at a party store to use as a statement piece.  No such luck for me, but it was pretty easy to replicate with a roll of wood-grain contact paper and a sheet of plastic drop cloth that I happened to have on hand - a clear shower curtain would work as well or even better.  Cut identical door shapes for each si﻿de of the curtain, front and back, add some details with a sharpie, and cut it into strips.  Seven likes them so much we still have them hanging in our doorways. 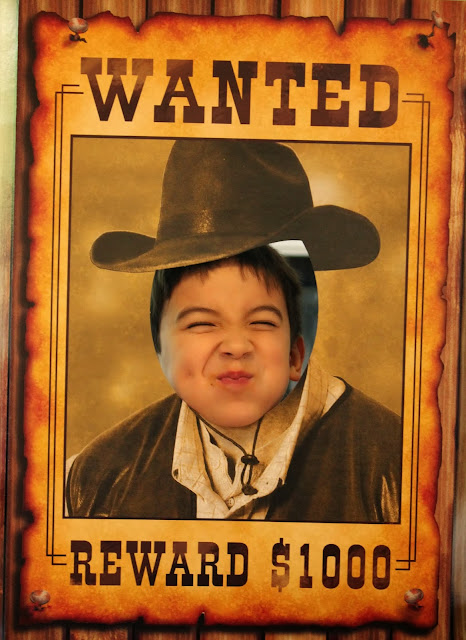 Here is another accent piece and fun activity for the guests from partycity.com.  Take their pictures as wanted criminals, then print them up and send them as thank you notes after the party. 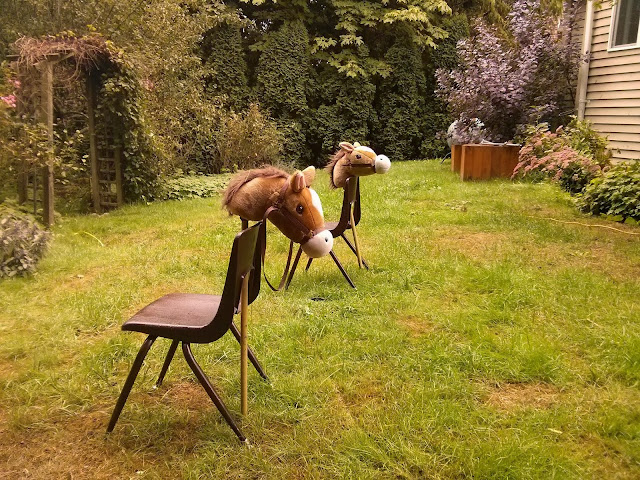 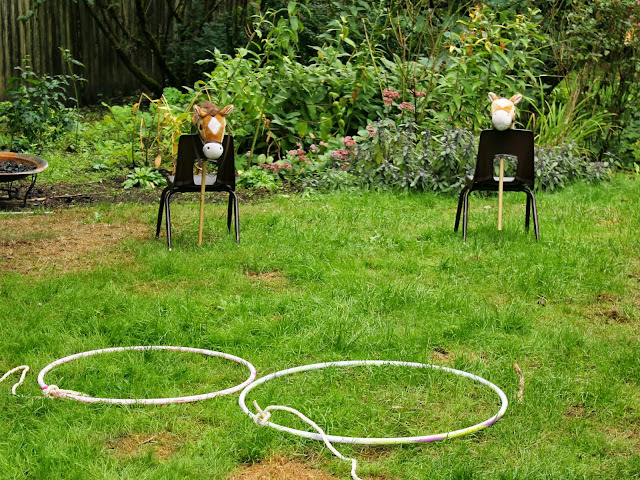 Little Sister contributed her hobby horses for a lassoing game:  armed with rope-tied hula hoops, the kids practiced lassoing these wild mustangs.  It's harder than you'd think for a bunch of 7-year-olds... and they'll do it for longer than you'd expect, especially if a bag of candy rewards is involved.  The rope is crucial - it is so much easier to haul back failed attempts with it. 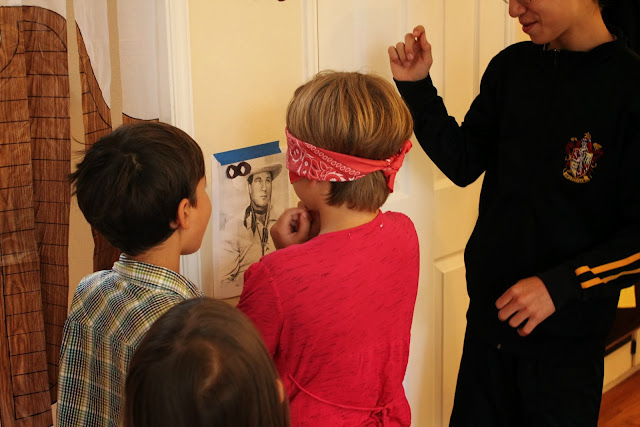 The Eldest came up with a pin-the-mask-on-the-Lone-Ranger game, and it was an easy thing for him to print up a photo from the old black-and-white TV show, and cut out a handful of black construction paper masks. 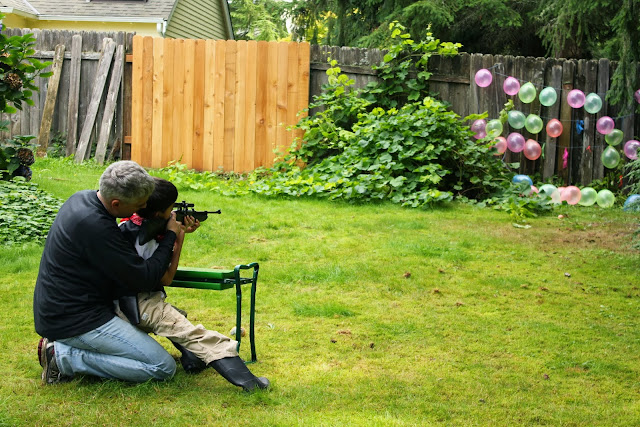 Dad had the idea that was, quite literally, the hit of the party - target practice on balloons with a BB gun.  We gave a our new Pacific Northwest neighbors a taste of Florida.  It was well-supervised, and no-one lost an eye... phew. 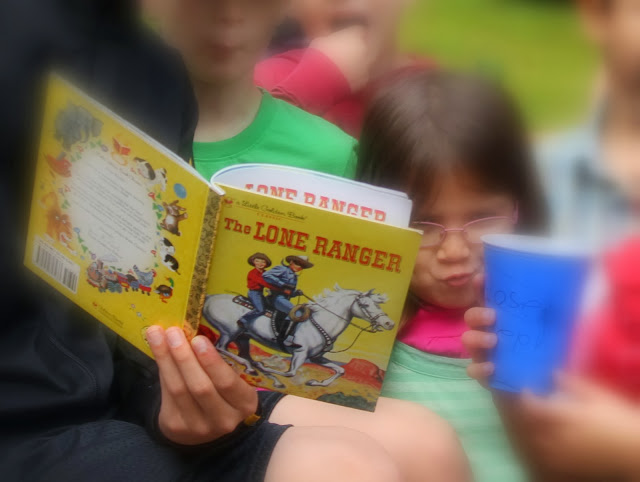 Then Twelve read them a story while Ten set up a treasure hunt to recover the stolen gold, with the clues he'd spent all morning plotting and writing out.  The kids ran all over the house and yard from one clue to the next, until they wound up at the "campfire"  -- the cake -- where the robbers had left the money bags: burlap loot bags (an idea recycled from last year's party) filled with 100 Grand bars and Hershey's Gold Nuggets, as well as their other Lone Ranger accessories.  We sugared them up with cake, and then sent them home to their parents completely overstimulated.

And now I have a few weeks before Four turns Five.

Have a question? Need a pattern or help with a project? E-mail me at songsfromthehearth {at} gmail {dot} com